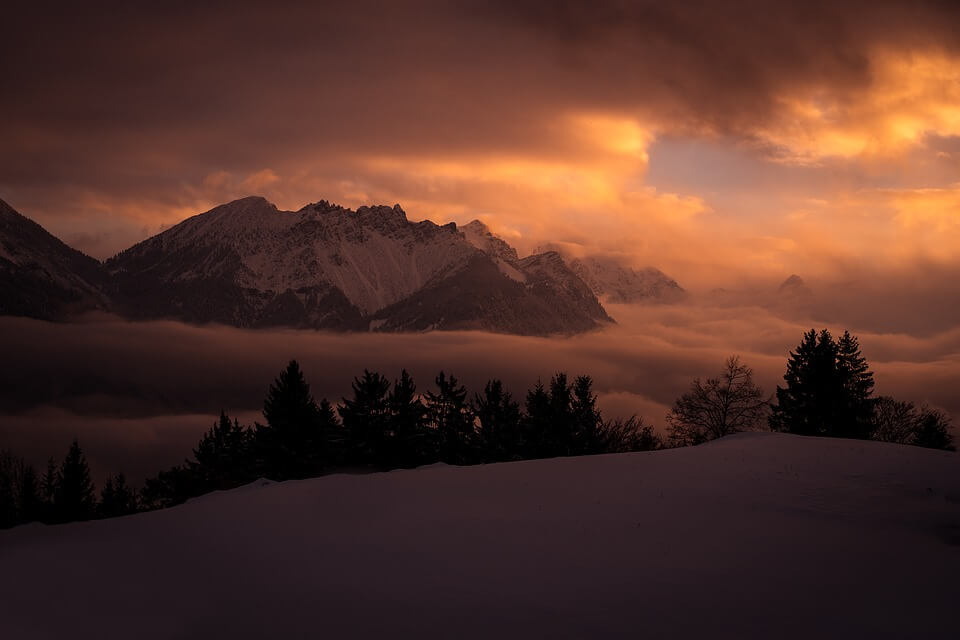 Top 15 coldest countries on the Earth

Humans have the capability to make any kind of space or habitat livable. May it be the scorching heat in the deserts, rugged mountains or the places with extreme cold climate, humans have managed to inhabit every kind of area with ease. If you are a winter person and you love the extreme temperature, you have come to the right place! Here, you will find the top 15 countries on the earth which experience erratic cold weather almost throughout the year.

Many of us coming from places with moderate temperature fluctuations would find these places absolutely inhabitable as the cold temperature here is not suitable for the faint-hearted. But, you would be surprised to know that there are in fact people living in these areas. They have adapted to the cold climatic weather and have continued to thrive.

The first place which comes to mind on hearing “Cold” is Antarctica. Here, the temperatures can drop down to -93 degrees. Even though it is not exactly a country, it is still the coldest place on earth to live and deserves a mention. It is covered in thick blankets of snow all year round. This is coupled with extreme wind speeds and lack of consumable water or any kind of food. This is the most inhospitable place to live in as it is impossible to build shelters or grow vegetation over here. This place features the Canada Glacier which is undoubtedly the most beautiful part of this region.

Mongolia is a well-known country which is famous for housing the coldest capital city, Ulaanbaatar. It is one of the coldest countries on earth and is situated in the central part of Asia, midway between Russia and China. Winter season lovers swoon this country to experience and explore this cold country with picturesque views. The average temperature in this region remains below zero and sometimes reaches -55 degrees during the months which fall between October and April. During the rest of the year, the temperature in Mongolia remains just a little above zero degrees. The cold climate of this region is a resultant of the high altitude coupled with desert-like weather. It is very difficult to survive in this country during the months of January and December. This is due to extreme temperatures all the available water freezes. The precipitation in the environment also becomes extreme during these months.

The entire landmass of Greenland is covered with snow through the several months of the year. The sunlight hardly reaches all the surfaces encompassed in this country and this is the reason Greenland experiences extremely cold temperatures. On most days, during the months which fall in between November and March, the temperature goes down to about -50 degrees in the interior region of Greenland where Eismitte and Summit Camp is located. Even during the months which are considered to comprise the summer season, the temperature does not go beyond 8 degrees. This makes Greenland the coldest country in the world 2019 and due to this only a small part of this landmass in south is inhabited by humans and the rest of the space remains wild and desolate. Greenland offers exciting activities to several adventure enthusiasts. The scenic beauty surrounding this place is incomparable.

Finland is located in the northernmost region of Europe. This country features unique topography which is very unlike Nordic countries. The Atlantic current and the Baltic area are the driving forces for the intense cold climate of this country which pertains throughout the year. The winter season lasts for about four whole months (December, January, February & March) in this country when the temperatures go below -50 degrees. In the Lapland region in Finland, the extremely cold temperature is coupled with strong biting winds. The inhabitants witness frost for almost 130 days each year. During the winter season, the northern cities of Finland which includes Helsinki, Oulu, Turku, among many others, tend to stay in dark for an entire period of two months. However, the southern parts do experience 6-7 hours of sunshine during the day time. The summer months are slightly more tolerable in Finland.

Thanks to the Gulf Stream and the warm air currents, Norway is comparatively warmer and pleasant than the other countries featured in this list. However, the climate of this region is cold throughout the year due to its close proximity to the Arctic Circle. The summer months in this region are limited to June, July, and August. Rest of the season, this country experiences cold winter season with temperatures as low as -50 degrees, especially in the northern parts like Karasjok. The minus temperatures coupled with strong winds, heavy rains and gales make living in Norway during the winters a challenging ordeal.

Formerly a part of the Soviet Union, this magnificent country is located amidst the Arctic Circle, just beneath Russia and is counted among the coldest countries in the world. The terrain in this country is pretty uneven in all locations and the temperature differs in different altitudes. There are several regions here like the capital city Astana, which are completely enveloped in permanent snow and ice. The temperature in this region tends to drop down to about -45 degrees in December and January and to combat with such cold weather, the locals have employed several survival tactics like ice fishing.

In comparison to the other cold countries mentioned here, Estonia has warmer and more comfortable weather conditions. However, Estonia does experience erratic rainfall from time to time, which causes the temperature to drop as low as -43 degrees owing to the icy climate. Especially in the areas located in the south-eastern region of Estonia, like the small town Jogeva, the winter season is unbearable making it very challenging for the locals to survive. The months which fall in between June and August are the most favourable months of the year to live and explore Estonia.

Switzerland is an incredible destination with tourists and travelers visiting this place from every nook and corner of the world. It is very sophisticated and works very well as a country in a general sense. It is one of the best functioning countries in the world. The only downfall to living in this region is the severe weather conditions during the winter season. Here, the temperature varies with the changing altitude and elevation. During the months December, January and February, the entire place gets completely covered in snow, ice, and chilling winds with temperatures dropping down to about -41 degrees especially in regions in and around La Brevine. However, the summer seasons are quite warm and pleasant which draws visitors from every part of the world.

In spite of being located in the northern region, Canada features several lakes and vast lands of greenery. However, during the months December, January and February, the temperature in this country can drop 40 degrees below zero making it one of the coldest countries on earth. The coldest cities of this country include Winnipeg, Saguenay, and Regina, among many others. The atmospheric air of Canada is attributed by moistness which makes the cold temperature during the winter season more bearable. People in Canada also witness periods of intense darkness and intense sunlight which is normal to any northern country.

The summer months in this region is very pleasant but the winter months are extremely cold. The entire country transforms into a frozen paradise during the winter season. The temperature during the months December, January, February and March, can drop to as low as -30 degrees in certain regions including Horsted, Londal, Brande, among many others. The cold temperature combined with snow, ice, frost and strong winds, makes Denmark highly difficult to survive in during the winter season. If you ever want to explore this country, the summer season would be the best time to do so.

The name perfectly defines the state of this country during the winter season. However, the environment in this country is slightly warmer when compared to Greenland. During the summer season, you can witness lush green shrubs emerging from the vast landscapes amidst the warm environment. However, during the winter months (October to February), Iceland undergoes a massive transformation and gets covered in a thick blanket of snow coupled with chilly winds. The temperature in the northern cities like Skagastrond, Grenivik, and Hvammstangi drops down to about -30 degrees during this season. The environmental conditions in Iceland feature a bit of humidity and moistness in the air which makes this region more livable as a sufficient amount of vegetation can be grown on the lands. This place features Vatnajokull Glacier which exhibits the most magnificent cave.

12. The United States Of America

The temperature in different regions of the United States of America varies from one another. The range of climatic conditions in this country is due to the large expanse of this country’s geography. The northern part of this country which accommodates states like Alaska experiences heavy snowfall and extremely cold climate during the winters. The temperature in these regions drop down to about -16 degrees between November to February. However, the southern and the central part of the country exhibit favorable climate throughout the year and is therefore perfectly suited for employing agricultural applications. Regions of this country which are located at higher altitudes ike Leadville, Brian Head, Fox Park etc, also experience extreme cold during the winter season.

Being spread across two major continents of the world, Russia is known for being the largest country and is also known to accommodate some of the coldest major cities in the world. Several regions encompassed by this country are not accessible during the winter season owing to the severe weather conditions. This place is so cold that even during the summer months; the inhabitants experience temperatures below zero degrees up to -15 degrees. In Siberia, the northern most regions were formerly used by the Communist regime to banish prisoners. This region continues to be enveloped in snow ever since. Russian winters are pretty intense and this has saved the country from being invaded by several standing enemy armies over the years.

The major cities of China experience moderate and comfortable climate during most days of the year. In particular, the winter season is pretty unbearable. The cities in the southern part of China including Shenzhen, Dongguan, Foshan, among others, have a comfortable environment even during the winters. However, the cities located in the northern part of china including Harbin, Shenyang, and many others experience heavy snowfall and extreme drop in temperatures during the winter season. Sometimes, the onset of winter is early in these regions; it starts by early October and lasts till April. The temperature in the northern cities of China can drop down to -15 degrees during the winter season.

Austria is a famous European country with a temperate climatic zone. The temperatures and other weather conditions vary slightly across this magnificent country. In the northern part of Austria, the lowland regions including cities like Vienna experience extremely cold temperatures during winters and warmer summers with low to moderate level of precipitation. This means that not all the parts of Austria experience severe cold temperatures but only some of the parts do. Apart from these colder regions, the other parts of this country offer favorable weather conditions for human habitation. The coldest month in this country is December when the temperature drops down to about -3 degrees.

No matter how extreme the weather conditions are in these places, these are undoubtedly some of the most astonishing places on the earth. With snow-capped mountain ranges along with cold white blanketed paths, the landscape here would remind anyone of a fairytale scene.

Disclaimer: All the above information has been reported from various online sources and the sole purpose of the above content is purely for providing helpful information on the subject discussed.