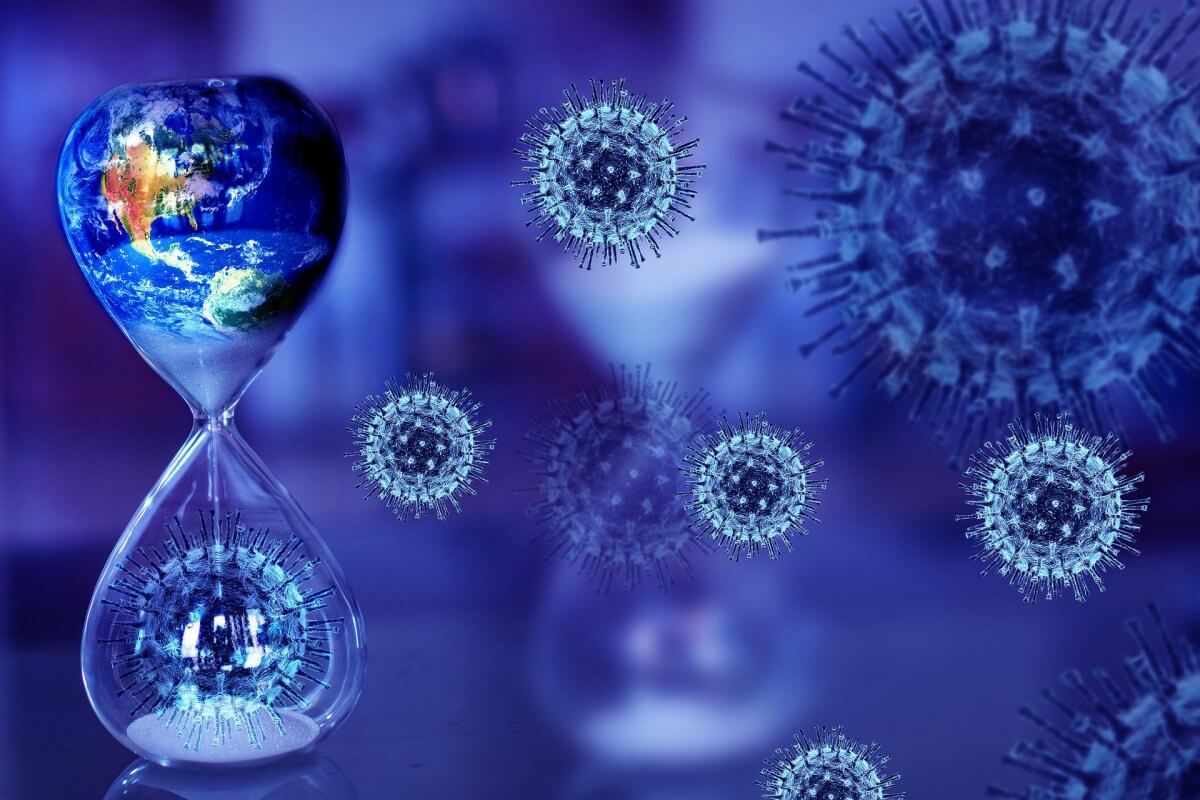 Novelty of Corona Virus ( SARS-CoV-2) and other Respiratory Viruses in the history.

The History has names of respiratory virus and Coronavirus is a new contender to the list. So far, less is known about the Coronavirus, it is novel, but the pattern observed are old and familiar of being respiratory and transmission from one host to other with a touch.

The Virus announced as Novel Corona Virus, has created a global pandemic, where countries have closed their borders, travel has stopped, restaurants and shops are closed, Physical contact and group gathering has been prohibited, the people have been locked to stay at home, no work or work only from home.

The current outbreak of COVID-19 has sparked global anxiety and concern that it might spread too far and too fast. Millions have already died, and millions are reported positive for the disease. The world has stood still to the Novel Coronavirus with no vaccine so far to cure the spread.

What is Corona Virus and from where it came?

In December 2019, reports emerged that a virus has begun to spread which had never been seen before in human life and its spread initiated in population of Wuhan, a large Chinese province.

The origin of the Virus is still unknown, the scientist donot possess a certain answer to its origin. Originally, the virus was understood to have originated in a food market in Wuhan and subsequently spread from animal to human. Some research has claimed that the cross-species transmission may be between snake and human; however, this claim has been contested.

Mammals such as camels and bats have been implicated in previous coronavirus outbreaks, but it is not yet clear the exact animal origin, if any. Claims are coming it for being unnatural and being it created in Laboratory. So far, every claim is subject to debate and question mark.

So far, it is known as an infectious disease-causing respiratory illness.

The Outbreak was declared as Public Health Emergency of International Concern on 30th January 2020.

The virus is announced as “severe acute respiratory syndrome coronavirus 2 (SARS-CoV-2)” by ICTV (International Committee on Taxonomy of viruses) on 11th February,2020 and the disease it causes is termed as “COVID-19” by WHO (World Health Organization) on 11 February, 2020.

The World Health Organization (WHO) on March 11, 2020, declared the novel coronavirus (COVID-19) outbreak a global pandemic.

How does it Spreads?

The COVID-19 virus spreads primarily through droplets of saliva or discharge from the nose and mouth when an infected person coughs or sneezes, these droplets are too heavy to hang in the air, and quickly fall on floors or surfaces. Studies have shown that the COVID-19 virus can survive for up to 72 hours on plastic and stainless steel, less than 4 hours on copper and less than 24 hours on cardboard. People can be infected by breathing in the virus if they are within proximity of someone who has COVID-19, or by touching a contaminated surface and then touching their eyes, nose or mouth. That gives the virus a passage to the mucous membranes in the throat. Within 14 days, the immune system may respond with early symptoms like a sore throat, a fever, or a dry cough.

It might make the lungs inflamed, making it tough for the person to breathe which can lead to pneumonia, an infection of the tiny air sacs (called alveoli) inside the lungs where the blood exchanges oxygen and carbon dioxide

For most people, the symptoms end with a cough and a fever. More than 8 in 10 cases are mild. But for some, the infection gets more severe. About 5 to 8 days after symptoms begin, they have shortness of breath (known as dyspnea). Acute respiratory distress syndrome (ARDS) begins a few days later.

ARDS can cause rapid breathing, a fast heart rate, dizziness, and sweating. It damages the tissues and blood vessels in the alveoli, causing debris to collect inside them. This makes it harder or even impossible to breathe. Many people who get ARDS need help breathing from a machine, a ventilator. As fluid collects in the lungs, they carry less oxygen to your blood. That means the blood may not supply the organs with enough oxygen to survive. This can cause the kidneys, lungs, and liver to shut down and stop working.

Virus invades the body,make multiple copies of itself and attaches to the healthy cells of the body,captures them and may damages to death.

Some people who have COVID-19 report symptoms involvingNose and mouth. Up to a third of cases include the loss of smell or taste.
Eyes. About 1% to 3% of people with the new coronavirus have pinkeye.
Stomach and intestines. The virus can cause a loss of appetite, nausea, diarrhea, and indigestion. You may have these symptoms before fever or any respiratory problems. Early studies have found that in severe cases, COVID-19 might lead to liver problems or damage.

As per the report of ,Centres for Disease Control and Prevention dated 08 April, 2020, Hospitalization Rates and Characteristics of Patients Hospitalized with Laboratory-Confirmed Coronavirus Disease 2019 — COVID-NET, 14 States, March 1–30, 2020.“During March 1–28, 2020, the overall laboratory-confirmed COVID-19–associated hospitalization rate was 4.6 per 100,000 population; rates increased with age, with the highest rates among adults aged ≥65 years. Approximately 90% of hospitalized patients identified through COVID-NET had one or more underlying conditions, the most common being obesity, hypertension, chronic lung disease, diabetes mellitus, and cardiovascular disease”.

As per the studies so far, most vulnerable to the disease are elderly and people with cardiovascular disease, diabetes, chronic respiratory illness, high blood pressure and cancer.

The U.S Centre for Disease Control and Prevention (CDC) does not have any specific guidance of protection of cure from the disease It advised the precaution as

* Avoid close contact with people who are sick.
* Restrain from touching your eyes, nose and mouth
* Stay home when you are sick
* Cover your cough or sneeze with a tissue, then throw the tissue in the trash; and
* Clean and disinfect frequently touched objects and surfaces using a regular household cleaning spray or wipe

And Most Important of all is to wash the hands frequently with soap and water for atleast 20 seconds.

Here we list a few of that arrayed the respiratory viruses in the history.

The Faroe Island are little volcanic spots at far north of Atlantic Ocean, isolated and cold. In 1846 it was the healthiest place on earth. In that year, a carpenter, a native of the island, returned from Copenhagen with a bad cough. He had the measles. The virus had been absent from the Faroe Islands for more than 60 years. Over the course of the next five months, 6,100 of the island’s 7,900 inhabitants fell ill. Over a hundred died. As per the report of   Peter Panum, the disease was spread by direct contact. The virus extinguished itself in span of five months. The virus ran out of new hosts, chain of infection was broken. The measles virus derived natural extinction as nobody was left to get it and pass it on. The chain of transmission was broken.

Experts are advising for isolation to break the chain of transmission of Novel Corona virus based on the previous experiences.

B814- The first Coronavirus of human origin

The first coronavirus of human origin, B814, was described in 1965 when Tyrrell and Bynoe isolated a virus from the nasal washings of a male child. The child had typical symptoms and signs of a common cold and the washing was found to be able to induce common colds in volunteers. The term “Coronavirus, was accepted in 1968.

n 1965 Tyrrell and Bynoe described that the virus isolated from this boy could be cultured in organ cultures prepared from tracheas of human embryos. Infection of these cells caused a mild cytopathic effect, a reduced ciliary activity. The symptoms observed were of common cold. It did not cause life threatening disease. Virus was inactivated by ether.

Severe Acute respiratory Syndrome coronavirus- a virus identified in 2003.  SARS, is a life threatening respiratory disease identified to be caused by coronavirus. It is believed to an animal virus originated probably from bat, transmitted to cat and to humans.

The first case occurred in Guangdong, China in 2002 but its symptoms were recognised in 2003. Following its emergence,the transmission occurred from human to human, mostly by droplets,nasal. The incubation period ranges between 3-10 days showing symptoms of high fever and in some cases Diarrhoea and in many cases causing pneumonia and caused fatal respiratory failure.

The illness spread to more than two dozen countries in North America, South America, Europe, and Asia before the SARS global outbreak of 2003 was contained.

According to the World Health Organization (WHO), a total of 8,098 people worldwide became sick with SARS during the 2003 outbreak. Of these, 774 died. In the United States, only eight people had laboratory evidence of SARS-CoV infection. All of these people had traveled to other parts of the world where SARS was spreading. SARS did not spread more widely in the community in the United States.

The spread and symptoms of the disease of novel coronavirus SARS Cov-2 are similar to SARS of 2003. Both are respiratory illnesses expelled through droplets and transmitted through human to human contact chain.

On June 05,2003 Who declared the containment of the virus with the message “The world must remain on high alert for cases of SARS”.

Even to this day’ No treatment exists except supportive care’. No vaccine is available to treat SARS.

A species of Coronavirus identified in 7 months old boy in Netherlands in the year 2004.The disease has been associated with acute respiratory tract infections (ARI).

The virus is found in young children, the elderly and immunocompromised patients with acute respiratory illness. The Virus originated from bats.

The reported the most common symptoms to be fever, cough, rhinitis, sore throat, hoarseness, bronchitis, bronchiolitis, pneumonia, and croup.

The pattern of spread is same the transmission through touch from person to person. The virus seems to have seasonal effect, it is more prevalent in winters.

The United States Centers for Disease Control and Prevention (CDC) recommends several measures for the prevention of infection with HCoV-NL63 including: washing hands often with soap and water, avoiding close contact with sick individuals, and not touching the eyes, mouth, or nose.

In 2005, a new human coronavirus, HCoV-HKU1, was identified in Hong Kong. The origin of the virus came from infected mice. In humans it causes respiratory disease with symptoms of common cold and may lead to severity of pneumonia, the first identified case of infection was observed in 71 years old man.

It is  a viral respiratory disease caused by a Coronavirus,that was first identified in 2012 in Saudi Arabia. The virus causes diseases that ranges from common cold to Severe Acute Respiratory Syndrome (SARS). The symptoms include fever, cough and shortness of breath. Pneumonia is common, but not always present. Gastrointestinal symptoms, including diarrhoea, have also been reported. Some laboratory-confirmed cases of MERS-CoV infection are reported as asymptomatic, meaning that they do not have any clinical symptoms, yet they are positive for MERS-CoV infection following a laboratory test.

The disease it causes is life threatening, nearly 35% of the infected population died.

Its spread is attributed to the transmission through human chain through close contact. The outbreak  occurred in several countries, with the largest outbreaks seen in Saudi Arabia, United Arab Emirates, and the Republic of Korea. The Virus also finds its origin in animal and then transmission to other species. The origins of the virus are not fully understood but, according to the analysis of different virus genomes, it is believed that MERS-CoV may have originated in bats and was transmitted to camels in the distance past.

No vaccine or specific treatment is currently available, however several MERS-CoV specific vaccines and treatments are in development. Treatment is supportive and based on the patient’s clinical condition. WHO advised general hygiene measures like regular hand washing before and after touching animals, and should avoid contact with sick animals.

WHO has been working with public health departments and researchers to understand the source of the virus and its vaccination.

The Novel viruses has been engulfing the lives of human species.