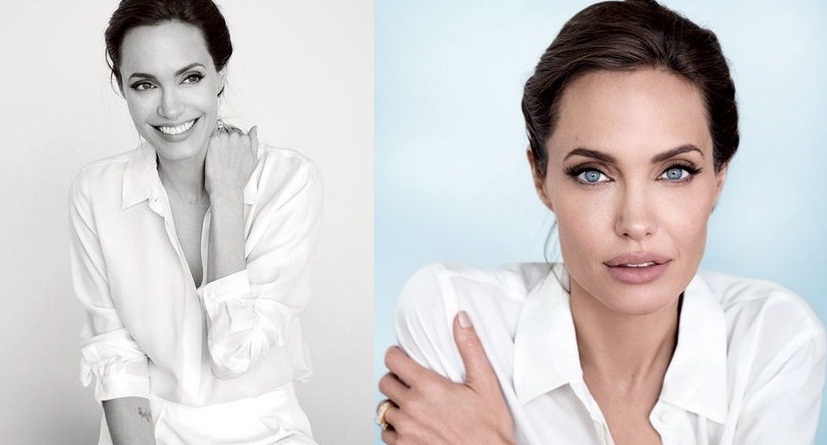 Angelina Jolie is an Oscar winner American actress, filmmaker and humanitarian. She gives a great contribution to the world as a flourishing brand ambassador and by conducting many human welfare programs.  She is the most successful leading actress in Hollywood, who raised her standards up in the most stunning actresses of the world.

Angelina Jolie was born in Los Angeles, California on June 4,1975. Her father Jon Voight is a famous Oscar winner and her mother Marcheline Bertrand is also a very famous actress. Jolie is of German and Slovak descent from her father’s side and on her mother’s side, she is of primarily French-Canadian, Dutch, and German ancestry. She faced many problems in her childhood time. After their parents divorce, Angelina and her brothers lived with their mother. Because of the separation of their parents, Angelina faced many financial problems and lived a very simple life. They only have the option to survived on her mother’s modest income.

Angelina Jolie firstly, joined Beverly Hills High School for her early studies. But she did not enjoy her years in this school because of getting teased by other students, who targeted her for wearing glasses and teeth braces. Then she moved to Moreno High School, which is an alternative school where she become a Punk Outsider. At the age of eleven, Angelina’s family moved back to Los Angeles and she began studying at the Lee Strasberg Theatre Institute. After completing her study in Lee Strasberg, She undertook some film studies at New York University and later joined the renowned Met Theatre Group in Los Angeles.

At Age 16, she starts her profession in modeling and become a famous face, which appeared in some music videos. She has made her first on -stage role as a German S&M dominatrix. After some time she began to learn the acting skills from her father Jon Voight and she become a successful model and appearing with Meat Loaf’ in the video ‘Rock’n’Roll Dreams Come Through’. Angelina expand her first taste of screen acting by starring in no less than five of her brother James’s student films. After that she gives many movies where she raises herself and her skill one by one in the way of success. She gave wonderful successful movies like Mr. & Mrs. Smith, Girl interrupted, Gia, Salt, A Mighty Heart, Changeling, Maleficent and many others.

She is the Oscar winner personality and won many wonderful awards. She got her first Oscar because of playing a fabulous role in  One Flew Over the Cuckoo’s Nest in 1975. Jolie won the triple crown “Girl” impel her to win the Golden Globe Award, the SAG Award and the Academy Award for best leading actress in a supporting role. She earns many other popular awards, which helps in making her career successful and famous in all over the world.

Angelina, a famous actress is a also a very good human being. She works to obtain aid for refugees in Cambodia, Darfur and Jordan, to name just a few and received the Global Humanitarian Action Award from the United Nations Association of the USA in the year 2005. Because of her excellent contribution she gains more attention from the press. She also shows a huge interest in pets and collected the snakes and lizards. The name of her favorite Snake was Harry Dean Stanton and her favorite lizard was called Vladimir.

Angelina Jolie is also famous because of the newspaper headlines which related to her personal affairs. She got married three times. Firstly, she married in 1995 with Hackers Co-star Jonny Lee Miller and they got separated in 1999 by getting divorced. After some year, Jolie married Academy award winner Actor Billy Bob Thornton and divorced in 2003. In the year 2002, Jolie adopted a son from Cambodia and named him Maddox and a daughter, Zahara three years later from Maddox adoption. She met with Actor Brad Pitt, who adopt her both kids with proper paperwork and in year 2006, the biological daughter, Shiloh of Jolie and Pitt was born in Namibia.  After that, she adopts some more child and also gave birth to twin babies. In the year 2012, Jolie and Pitt become engaged and married after some times.